Blog: A taste of what you may find on Maui

It’s hard to miss Hawaii in the news these days. Big Island’s Kilauea lava flow is making headlines around the world. The pictures and video footage are incredible. Unfortunately some of the media coverage has been misleading, leading people to believe all of Hawaii is under siege.

Another owner at the Palms at Wailea complex told me yesterday that a family had cancelled due to the volcanic eruption on our neighboring island. She had done her best to convince the family that their Hawaii vacation was safe, but they cancelled, losing thousands of dollars in airfare and accommodations (guess what, the cancellation insurance told them no – they weren’t covering cancellation due to an event far removed from their stay). Bummer.

So, some clarification – what is this recent lava flow on Big Island all about?

Taking it back to the basics – Hawaii is comprised of multiple islands. Our condos are located on Hawaii’s second largest island, Maui. Big Island (also known as the Island of Hawaii) is the largest and newest island in the Hawaiian island chain. Hawaii’s islands were formed by volcanic eruptions out of the ocean floor. The Island of Maui itself has one extinct volcano (West Maui Mountains) and one dormant volcano (Haleakala – its most recent eruption dating back to the 1480s). Big Island – to the East of us – is comprised of five volcanos, of which Mauna Loa and Kilauea are considered active. Mauna Loa most recently erupted around 30 years ago, Kilauea has been having continuous volcanic activity for the past 35 years.

A year and a half ago I took our boys to Big Island for a helicopter tour of Kilauea and the Pu’u O’o Vent. It was fascinating.

What are the conditions on Maui – is Maui at all affected by the volcanic eruption?

I live in Kihei (in South West Maui) and these are the current conditions: the sky is blue, the air is clear, there is no effect from Kilauea’s current antics. The ocean temperature has not risen here (yes, this has been asked), we cannot see the lava, in fact, it’s business as usual here.

Can that change? Yes – the only effect that we may see is vog (volcanic air pollution). This is something we have experienced from time to time in the past 35 years since Kilauea has (most recently) been active. Hawaii’s prevalent trade winds are currently blowing the vog west and out to sea. However, every now and then the trade winds do subside. When that happens, southerly (Kona) winds can blow the vog up to Maui. The sky will appear hazy and we have the most amazing sunsets, but most people will hardly notice. If you have asthma, you will want to take precautions.

Should you be avoiding Big Island?

It depends. Yes, you should absolutely avoid the eastern-most corner (the Puna district of Big Island) as local residents are dealing with their own trauma. However, many other parts of Big Island are absolutely safe. In fact, I just read that the annual Iron Man Tournament is slated to go ahead next month (it takes place on the West coast of Big Island). Here’s another graphic I found on Facebook. 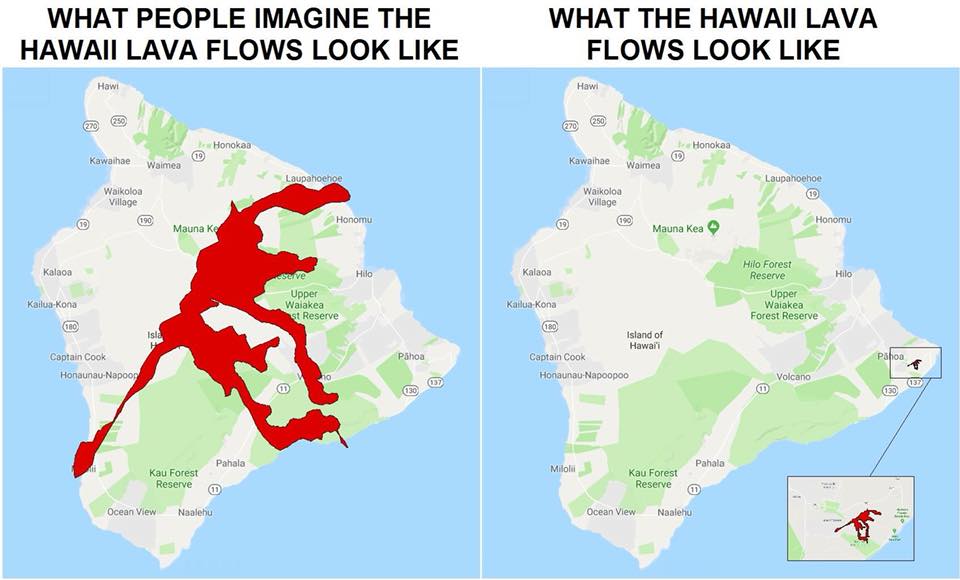 Our thoughts and prayers are with Big Island’s affected residents. Praying for safety and that the current eruptions stop soon.

Signup for the latest news